Kimonos from the Okura Collection 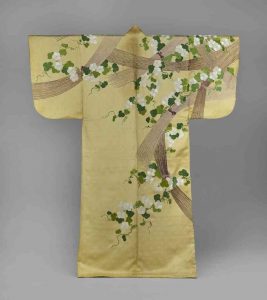 Discover the colourful tales from ‘No’, one of Japan’s oldest forms theatrical forms, this autumn. On 21 October the Rijksmuseum unveils seven magnificent No theatre kimonos that exemplify the changes in No through the centuries. No theatre originated in the fourteenth century and is a stylized Japanese dramatic form in which song, music and dance come together. The highlight of the presentation is a magnificent eighteenth-century kimono with embroidered moonflower tendrils on saffron-coloured woven silk damask.

Kimonos from the Okura Collection runs from 21 October to 13 December 2016 in the Rijksmuseum. The exhibition, in collaboration with Hotel Okura and Amsterdam City Council, is being staged to mark the forty-fifth anniversary of Hotel Okura Amsterdam.

The basis for No theatre was developed under the reign of the shogun Yoshimitsu (1358–1408) towards the end of the fourteenth century. In No theatre, actors try to create yugen, a modest, elegant beauty, with dance, mime and poetry. The Buddhist view of the world as a place of transience, suffering and seeking salvation is the theme of No theatre. The order of the plays, the structure of the companies and the style of the performance have changed very little since the seventeenth century.

The kimonos on display in the Rijksmuseum give an impression of the colourful atmosphere that must have existed during No performances in the past. The leading man who slowly made his entrance, looming up in the half-darkness of the bridge to the main stage, with an abundance of fabrics decorated with gold, silver and contrasting colours glittering in the subdued light.

The Okura Museum of Art, founded in 1917, was the first private museum in Japan. It housed the collection of Okura Kihachiro (1837–1928), a businessman who in 1855, immediately after the end of Japan’s long-held policy of national seclusion, moved to Tokyo from the countryside and set up Okuraya, his first grocery store. The shop was the foundation stone of a very successful conglomerate, which opened its first hotel in Tokyo in 1962. From the outset Okura Kihachiro was a patron of the arts and the family still honours that tradition.

The seven kimonos from the Okura Collection provide a representative overview of No theatre costumes. The highlight is a nuihaku, a magnificent eighteenth-century kimono with embroidered moonflower tendrils on saffron-coloured silk damask.

Japan is one of the focus countries in the international policy of the city Amsterdam and the metropolitan region which aims to strengthen international and economic ties and promote knowledge sharing between local governments and knowledge institutions.