Wolfson’s spectacular interactive sculptures are the highlight of his first Dutch solo exhibition.

Amsterdam, November 10, 2016 – Art lovers in New York queued in long lines to see his latest installation. Now audiences can experience the work of American artist Jordan Wolfson (New York, 1980) for the first time in Amsterdam. Wolfson’s inaugural show in the Netherlands unfolds in two parts, both of which focus on his spectacular animatronic sculptures. The diptych opens with Wolfson’s most recent computer-controlled sculpture, Colored sculpture (2016) during Amsterdam Art Weekend. The centerpiece of the second part is the interactive Female figure (2014). Both feature animated videos and digital paintings alongside Wolfson’s robotic sculptures. 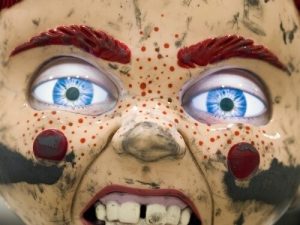 Director Beatrix Ruf comments on the exhibition: “Jordan Wolfson is one of the most outspoken minds and impressive artists of his generation. He has contrary attitudes about humanity in the current, fervent visual culture, and he conveys these ideas in striking images. At the Stedelijk, we enjoy working with young artists who reflect on contemporary life, something at which Wolfson excels. You don’t just casually walk past his work; it seeks direct contact with the spectator. The exhibition will be a spectacular experience, one that everyone really must see.”

In May this year, visitors eagerly waited in line to see Colored sculpture at David Zwirner Gallery in New York. In the work a boy in bright cartoon colors dangles from heavy chains attached to a steel gantry; his movements are controlled by a computer program. As they perform a rhythmical dance, the chains force the boy into a sequence of elegant poses. But the balletic choreography is short-lived; before long, it degenerates into a danse macabre. The marionette’s eyes conceal facial recognition technology, which it uses to track the viewer’s gaze and make attempts to establish contact. Yet the boy cannot escape the computer’s manipulations and is subjected to punishments that are felt on an almost visceral level. The pure physicality of the installation, which fills the entire gallery, lends the work a volatile, brutal edge.

Colored sculpture is a discomfiting artwork laden with paradox. It is both a computer-controlled machine and animated “human” sculpture: intensely physical yet coolly abstract, endearing yet grisly. In this way Wolfson creates an alien, intuitive space for interaction between viewer and art object.

Video works
Wolfson’s animated videos combine layers of traditionally shot and computer-generated footage that glide over each other. But before any coherent narrative forms, the layers separate, leaving us with a space beyond the reach of familiar interpretations. It appears as if Wolfson is less interested in the depicted themes, and more in the formal dynamic of animation as medium.

In Raspberry Poser (2012) an animated HIV virus bounds merrily through Manhattan’s high-end shopping district. Joined by a condom and a medley of red blood cells, it mutates into well-known icons such as the anarchy symbol and the triangle logo of ACT UP, an AIDS advocacy group. In the background is a soundtrack of slowed-down versions of Beyoncé’s “Sweet Dreams” and ‘Beautiful Nightmare’. Wolfson himself appears in a live-action scene, cast in the role of an archetypal punk. It’s safe to assume that the red-headed cartoon character that continually pops up is the artist’s alter ego: tormented, narcissistic, insecure – neurotic traits that Wolfson associates with the process of artistic creation, also apparent in his video The Crisis.

In The Crisis (2004) a young Wolfson wanders like a tourist through a medieval church. Gesticulating excitedly, he talks about the process of making art in the shadow of the contemporary art greats. Will he ever create work of the same caliber as theirs? Is he destined to go to his studio day after day and wait for something to happen? Or would he be better off raising a family, to find out later if his artistic ambitions have persisted? Shot in a church, the video has the tone of a confessional – the angst and uncertainties of an artist at the beginning of his career.

Part 2: TRUTH / LOVE
The second part of the exhibition opens in February 2017 and features a new video installation and Wolfson’s first animatronic: Female figure (2014). This computer-controlled, hyper-sexualized blonde robotic woman flaunts the kind of outfit ordinarily worn by pop stars in music videos – a see-through miniskirt, high-heeled thigh boots, and long gloves. A device loaded with motion tracking software, concealed beneath a green, bird-like mask, enables her to lock eyes with viewers. While the woman speaks to them – accompanied by a soundtrack of pop songs – she performs a sophisticated choreography before the mirror, seductive yet grotesque, in an endless ballet of looking and being looked at.

About the artist
Over the last ten years Jordan Wolfson (New York, 1980) has become known for his work in a variety of media, including video, sculpture, installation, photography, and performance. He borrows intuitively from the world of advertising, the Internet, and the technology industry, producing ambitious, enigmatic narratives. With this, he creates idiosyncratic content often featuring a series of fictitious animated characters. His work has been widely exhibited internationally at venues such as the Cleveland Museum of Art in Ohio, S.M.A.K. in Ghent, Kunsthalle Wien, REDCAT in Los Angeles, Galleria d’Arte Moderna e Contemporanea di Bergamo in Italy (2007), and Kunsthalle Zürich (2004). In 2009 Wolfson was the recipient of the Cartier Award of the Frieze Foundation. He lives and works in New York and Los Angeles.

About Amsterdam Art Weekend
The Amsterdam Art Weekend is an annual, four-day event that spotlights contemporary art throughout this capital city. With over a hundred programs organized on location at some fifty renowned institutes for the arts, the event offers participants a genuine, 360-degree art experience. Featuring exhibitions, performances, film screenings, lectures, and tours, the program is designed to give its audience of culturally interested persons, art lovers, and professionals an opportunity to discover the latest developments in contemporary art.

Apart from the public program, Amsterdam Art Weekend also features events exclusively for professionals. The latter are invitation only and provide international art professionals with a wonderful incentive to visit Amsterdam each year.

Stedelijk Contemporary
The Stedelijk Museum regularly presents solo shows by a promising generation of artists. Many of these presentations feature new productions and recent acquisitions. The Stedelijk seeks to respond to current events and stimulate contemporary talent by, in some cases, also commissioning new work. The Stedelijk champions artists as advocates of new ideas, shaping the future identity of the museum’s collection by cultivating lasting relationships with talented young artists early on.

Jordan Wolfson belongs to the post-Internet generation: artists who reflect upon the increasing digitalization of society and developments in genetics, robotics, and cybernetics. Within the Stedelijk Museum’s program, Wolfson’s show builds on recent exhibitions by artists such as Ed Atkins, Avery Singer, and Jon Rafman, whose work explores new technologies and how they define us.

With special thanks to the members of the Jordan Wolfson Exhibition Circle: ProWinko Nederland B.V., Ringier Collection, and donors who wish to remain unnamed. The catalogue has been made possible by Joe and Marie Donnelly.