Christmas is celebrated throughout the African continent by Christian communities large and small. There are approximately 350 million Christians in Africa. On Christmas day carols are sung fromGhana on down to South Africa. Meats are roasted, gifts are exchanged and family visits made. The Coptic Christians in Ethiopia and Egypt celebrate Christmas on the 25th of December in their calendar, which is the 7th of January for most of the rest of us. Kwanzaa is not celebrated in Africa, as it’s an African-American holiday. And unless you’re in the Atlas Mountains in Morocco, there’s little chance of anyone enjoying a white Christmas in Africa.

Even in some of Africa’s predominantly Muslim countries, Christmas is still marked for celebration. InDakar, Senegal’s capital, hawkers are happy to sell plastic trees and inflatable santas. “While secularism may mean elsewhere that each person is free to celebrate his or her own holidays, many in Senegal have interpreted it to mean they should celebrate all holidays.” (Mail & Guardian). 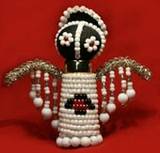 Those who can afford it will generally give gifts at Christmas but the holiday is not nearly as commercial as it is in Europe or the Americas. The emphasis is more on the religious aspect of celebrating the birth of Jesus and singing in church, than it is on gift giving. The most common thing bought at Christmas is a new set of clothes to be worn to the church service. Many Africans are too poor to be able to afford presents for their kids and there aren’t too many toy stores in rural Africa to shop at anyway. If gifts are exchanged in poorer communities they usually come in the form of school books, soap, cloth, candles and other practical goods.

As in most Christian cultures, celebrating Christmas dinner with friends and family tops the list after attending church. In most countries Christmas is a public holiday and people take the opportunity to visit friends and family. In East Africa goats are quickly snapped up at the local markets and roasted on Christmas day. In South Africa the sun is hot and the beaches are full of families enjoying braais (bbq’s) or traditional Christmas dinners with paper hats, mince pies, turkey and plum pudding (a vestige of the British colonial legacy.) In Ghana Christmas dinner is not complete without fufu and okra soup and in Liberia rice, beef and biscuits are the order of the day. Zimbabweans make sure there’s plenty of bread, jam and tea to eat along with their goat meat.

The history of Christianity in Africa dates back to the 1st Century AD. What every missionary has found since that time is that Africans are very spiritual people. (Besides Christianity, the other main religions are Islam and indigenous beliefs). Going to church is generally the main focus of Christmas celebrations in Africa. Nativity scenes are played out, carols are sung and in some cases dances are performed.

One of my earliest Christmas memories in Malawi is watching groups of young children go door to door to perform dances and Christmas songs dressed in skirts made of leaves and using home made instruments. They received a small gift of money in return. In many countries the processions after the Christmas Eve church service is a joyous occasion of music and dance. In the Gambia for example, people parade with large intricately made lanterns called fanals in the shape of boats or houses. Every country has their own unique celebrations no matter how small their Christian population.

How to Say Merry Christmas