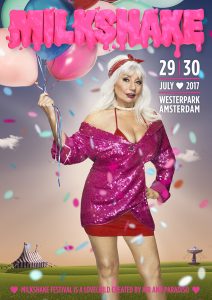 On Monday April 10th, Milkshake Festival won an award at the Gouden Kabouter awards, namely ‘Party of Sociability’. This prize is awarded to Milkshake because the Netherlands voted for the Milkshake audience as the best audience.

Milkshake festival is dedicated to their motto “anything is possible’. It’s a festival that celebrates sexuality, identity and freedom. Visitors are free to dress and express how they want to be whether it’s Drag Queens, Glitter, Jockstraps or just jeans and a shirt. Because people can be themselves during Milkshake, it forms a feeling of freedom and acceptance. All this creates a unique and positive atmosphere during the festival.

This year Milkshake will take place at Westerpark Amsterdam on 29 and 30 July 2017. The festival will travel abroad for the first time and is going to spread their love and freedom in Sao Paulo Brazil on the 16th of June.