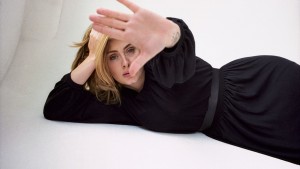 As Adele steers through a South London high street in her four-door Mini Cooper, with her toddler’s vacant car seat in back and the remains of a kale, cucumber and almond-milk concoction in the cup holder, a question occurs to her. “What’s been going on in the world of music?” she asks, in all sincerity. “I feel out of the loop!”The only possible response is way too easy: Well, there’s this one album the entire industry is waiting for…”Oh, fuck off!” Adele says, giving me a gentle shove and letting loose the charmingly untamed laugh — an ascending cascade of forceful, cartoonish “ha’s” — that inspired a YouTube supercut called “The Adele Cackle.”