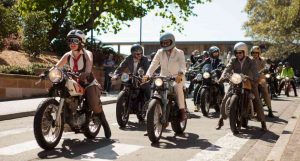 The full programme for the European Capital of Culture Aarhus 2017 was unveiled today at a launch event in the Danish city.

“Aarhus 2017 is going to be a creative tour de force,” said Aarhus 2017 CEO Rebecca Matthews, “with new works, special commissions, premieres, major events and festivals. And it will encompass plenty of free as well as ticketed events – experiences that are huge and humanscale all at once.”

The programme also features a dazzling array of international talent from wider Scandinavia, Europe and beyond, bringing global culture to the Central Denmark Region for the entire year. Under the banner of ‘Let’s Rethink’, Aarhus 2017 challenges the world to use arts and culture as a means of exploring the choices we must make for our future.

Whatever those choices are, they will bring changes to the way we live and work, the places we live in, and the very structure of our society.

“We hope that the different perspectives and creative energy expressed by the outstanding artists assembling in Aarhus next year will be a catalyst and resource for managing those changes,” said Matthews.

The Aarhus region and its visitors will have the chance to get up close and personal with some of the most exciting cultural talents on the international stage today. They include Aarhus 2017’s Artist-in-Residence Anohni, who promises a vibrant interweaving of human identities in sound and vision; a performance of “Distant Figure”, a collaboration between one of the legends of contemporary theatre, US director Robert Wilson, and the iconic artists, choreographer Lucinda Childs and composer Philip Glass; Australian actor Cate Blanchett imbues dramatic life into the text collages of the ground breaking project “Manifesto” by German artist Julian Rosefeldt; choreographer Wayne McGregor and the Paris Opera Ballet will transform US novelist Jonathan Aarhus Safran Foer’s “Tree of Codes” with music composed by Jamie xx and scenography by Olafur Eliasson; and there will be a concert featuring pianist and conductor Daniel Barenboim with the legendary West-Eastern Divan Orchestra, a project aimed at celebrating freedom, equality and coexistence through music.

Launching the European Capital of Culture programme, Aarhus 2017 CEO Rebecca Matthews paid tribute to the many volunteers supporting the Year – our “everyday heroes,” in her words, as well as thanking partners and sponsors who helped make the eight-year dream a reality, and whose “spirit of Rethinking has been the foundation for the programme,” she said.

“We are extremely excited about the year ahead. The quality and diversity of the programme we have assembled mean there is truly something for everyone, whether you’re from Aarhus, Denmark, or visiting from elsewhere. We have created a huge, game-changing year by combining the knowledge of global experts on culture with the views of local people, to determine what quality means in and for arts and culture, here and now.”

Full details of the hundreds of artistic and cultural events taking place in 2017 are featured in the Aarhus 2017 programme guide, which runs to a staggering 500 pages. Whether it’s the iconic, stage-based events featuring worldwide stars, or smaller and more intimate exhibitions, debates and community activities, the programme has something to appeal to fans, families, fun-seekers – and even sceptics – encouraging all to rethink. Or as the Patron of Aarhus 2017, HM Queen Margrethe II, states in her foreword to the programme: “Rethink: Think the new, think anew, think again!”