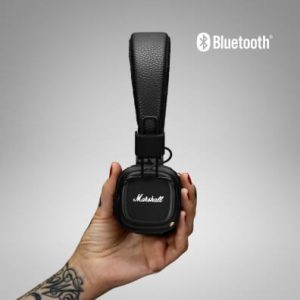 THE CLASSIC MAJOR II NOW CUTS THE CORD AND GIVES YOU THE FREEDOM AND CONVENIENCE OF A WIRELESS HEADPHONE COMBINED WITH OVER 50 YEARS OF TRIED AND TRUE MARSHALL PERFORMANCE. SEAMLESSLY CONNECT TO YOUR LISTENING DEVICE WITH THE LATEST IN BLUETOOTH TECHNOLOGY

Marshall is a true rock legend. That uniquely clear and expressive sound combined with a mythical stage presence has enraptured music fans around the world for five decades. We’re celebrating the brand’s rich heritage with commemorative products that live and breathe Marshall. The legacy begins in a small drum shop in Hanwell in the 1960s, where Jim Marshall sought to give a bunch of then-local guitarists the sound they wanted – a sound that was harder, crunchier and more rich. The result was the JTM45, an amp that reverberated with a sound that was much heavier than anything ever heard before. In a twist of rock and roll fate – those guitarists, much like the Marshall name, would go on to revolutionize music forever.

The Major II Bluetooth keeps the music going strong for over 30 hours of playing time on a single charge, which is above the industry standard. Turn on, tune in and rock out to the customized 40mm dynamic drivers tuned for excellent bass response, smooth mids and sizzling highs. Major II  Bluetooth® connects to your device using Bluetooth® aptX. Not only can you blast your favorite tunes in CD-like audio quality, aptX also minimize audio/video syncing issues, allowing you to watch movies without experiencing horrible lip sync. The double-ended coil cord with mic & remote is completely detachable and compatible with any music player that receives a 3.5mm jack. When listening to music wirelessly, you can use the empty 3.5mm socket to share audio with someone else. With the analogue control knob, you can play, pause, shuffle and adjust the volume. Phone functionality is also included so you can answer, reject or end a call with a few simple clicks. The built-in microphone allows you to have conversations or record voice memos through your device. The Major II Bluetooth is the perfect travel companion. Its collapsible design makes the headphones easy to store when they’re not in use. Marshall Major II Bluetooth is available in EMEA and the US.