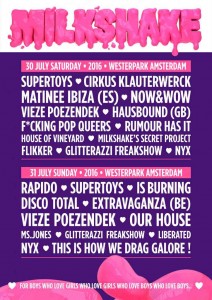 In late July, the Amsterdam Westerpark will be dominated by Milkshake Festival. It is the fifth edition and because of this anniversary the festival will celebrate for an entire weekend. Milkshake Festival takes place on Saturday 30 and July 31, in the middle of the two-week European GAY Pride in Amsterdam. Not only the duration of the festival is extended: there are nine instead of seven stages, of which seven will be fully converted in the night from Saturday to Sunday creating two completely different days. New is a major roller disco and by popular demand there will be a techno stage both days.

Milkshake festival is a dance festival that has been created from the thought ‘nothing should be a must, anything is possible’. Milkshake festival shows that entertainment, taste in music, choice of clothing and status has nothing to do with sexuality. Life is just a party thanks to the great diversity of skin colors, religions, sexual preferences and male and female forms. Milkshake wants to celebrate the city’s initiatives and is an impetus to bring courtesy and friendly manners back into society. Thick, thin, small, large, gay, straight, trans, black or white: people are the salt of the earth and this is what we celebrate!

Initiator Marieke Samallo: “We have our own stages, Super Toys & Vieze Poezendek, which will shine both days as fixed elements of Milkshake. All other stages will be converted in the night from Saturday to Sunday. Both days we work with several Dutch and international organizations. For instance Extravaganza Belgium who are responsible for the closing party of several Belgium prides there. And new this year is Our House, with hosts Nickie Nicole & Percy, both known for, among others Roxy and iT. They will bring the famous House Classic sounds. “

Artists Twice As Likely Not To Have Health Insurance

The Multifunctional Beach Dress for a Stress Free Holiday