Described by Jacob Lawrence as the best narrative painter he had ever met, West Texas native and Paris-based Ealy Mays has been the bad boy of contemporary art who has challenged art enthusiasts with his brand of subtle satire and eclectic style for over 45 years. 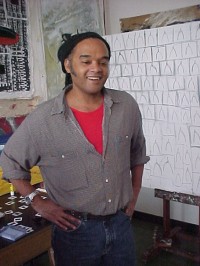 Ealy Mays has the distinction of abandoning his education and training as a medical doctor to pursue his art. The former medical student from Wichita Falls Texas, whose calling was art, is distinguished from many in his lack of a formal degree or training in art.  He is a permanent recurring resident at Cité Internationale des Arts in Paris and is also a local Paris historian with a passion for introducing visiting tourists to the extraordinary African American literary and artistic legacy within the city walls.