The fifth edition of the two-day EMBASSY FESTIVAL will kick-off on Friday September 1st at 5pm at the Lange Voorhout in The Hague. Iranian musician, songwriter and composer FAARJAM will perform his dreamy and melodic songs on the stage right in front of the Diligentia theatre. LEVI SILVANIE, who was born in Curacao and has soul and rhythm streaming through his veins, will take you on a musical journey through the Caribbean. Visitors will also be able to enjoy the charismatic and moving songs from Ethiopian-born MINYESHU, who has in the past performed with famed African colleagues such as Salif Keita, Youssou N’Dour and Angelique Kidjo. Your caffeine fix will be taken care of by KOFFIE. With their afro-, Latin- and funk grooves, the Dutch band hope to bring people together, something that the Embassy Festival embraces as well. The Embassy Festival proves to everyone on a yearly basis that culture brings people together. 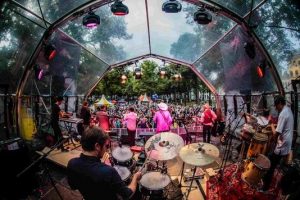 FOUR STAGES, KIDS COMPOUND & INTERNATIONAL MARKET
On Saturday 2 September the Embassy Festival will be kicking off at noon around four stages, the Kids Compound and the International Market. On the Contemporary Stage you will find that BLAHALOUISIANA (HUN) will be casting a spell on the audience with their dazzling music, inspired by the beat movement from the 60’s and the current singer-songwriters from the South of America. The twelve musicians from NUBIYAN TWIST (GBR) will get everyone’s hips moving and feet tapping with their afro beat, hip hop and jazzy sound. Award winning conductor Simon Murphy will take everyone on a musical BAROQUE ROAD TRIP through Europe with his international colleagues from The Hague’s Baroque Orchestra, The New Dutch Academy. With recent successes at New York’s Carnegie Hall and BBC Proms, the well-known mezzo-soprano BARBARA KOZELJ (SLO) is a definite must-see. Acts that have previously been announced include VALENTINA TÓTH (HUN) and LUKE WELCH (CAN) for the Classical Stage and BAPTISTE W. HAMON (FRA) and BRIAN DEADY (IRL) for the Contemporary Stage.

Kids will have a field day at the KIDS COMPOUND, with an exciting kids programme and lots of surprises. Give your taste buds the royal treatment at the INTERNATIONAL MARKET with the best wines, sausages, cakes, sandwiches and lots of other traditional bites that have been ‘flown in’ from across the globe. Around the CREATIVE ARENA and the CONTAINER STAGE, visitors will have a chance to devour dance, music and theatre from all over the world (Ukraine, Nepal, Finland, Philippines, South Africa, Mexico, India, Bosnia-Herzegovina, Ireland and more). Besides the acts brought to you by the embassies, there will also be performances that have been made possible by the cultural institutions in The Hague. This, as a preview of the upcoming cultural season that will have its kick-off in the same weekend. The Embassy Festival will from 8pm transition into the UIT FESTIVAL THE HAGUE. JEANGU MACROOY (NLD/SUR) will kick-off those festivities with his rich and soulful voice.

MORE INFORMATION ABOUT THE FESTIVAL: WWW.EMBASSYFESTIVAL.COM