As the Executive Director of Dorfman Jewelers, what part of your job do you find most inspiring? 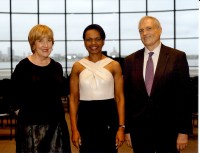 “First let me say that I have been fascinated by jewelry since I first started at Cartier in Paris in 1974. At the time, the fascination came from the beauty of jewelry. As I entered the world of high end jewelry, my interest focused on gems. I was reminded daily that all these gems come from nature and that the human intervention was what turned them into beautiful jewels. A process starting with the extraction from earth, cutting, polishing and then setting into jewelry created by talented designers who had women in mind.

Today, in my current position, 37 years into this business, what fascinates me is the unknown. The unexpected Wall Street melt down of October 2008 has created an immense challenge for many high-end independent retailers. This challenge became an inspiration to find creative ideas to keep the business alive and well. And doing it in a manner that would not sacrifice the quality of the production offerings; rather a new way to communicate the information to our customers using special events. These special events are no longer based only on the jewelry itself; rather on all the elements that allowed these jewels to exist. These elements include history, human intervention, talent and the new life style of society that evolves at such rapid pace; especially in the way we communicate. Positive attitude, accepting the changes, utilizing knowledge from the past and the will to enter the new. A non-ending learning process that fascinates me daily.

Tell us a bit about yourself. Where were you born and what exactly brought you to Boston?

I can say I am a country boy (most people laugh at me when I say that: sure, they say!). But truly was born in the country; in the Auvergne region, center of France; a mostly agricultural region. My grandfather made me appreciate nature, the moon and taste of the seasonal products we ate daily. This basic foundation of being close to nature has created a bond that allowed me to remain realistic about life and never blasé. Between then and now, a life devoted to discovery. Discovery of countries, regions and cultures. My profession allowed me to travel a lot to many different parts of the world but it truly started in 1968 when I decided to go and study in London to expand my boundaries of culture and human connections. I became fascinated by New York City in 1975 during my first trip. A few of my European friends involved in the fashion industry had move to NY and I decided to do so in 1982.

I have visited most European countries and many countries in the Middle East, Africa, Asia and Central America since. What took me to Boston was a new job search 8 years ago after I realized that most companies I had worked for previously, became corporate. i had absolutely no interest in working for a corporation. Dorfman was a family owned business. The 2 sons, who inherited the store after the sudden loss of their mother, then father, were desperately looking for someone to run the business since they never had been involved themselves; rather, they were running another large company, founded by one of them. Boston was on a short list of cities I was willing to live in; a city where I could walk everywhere (the others were Chicago, Washington DC and San Francisco).

Which jewelers do you find particularly inspiring?

I think that there are independent designers who are very inspiring, often from France or Italy. Their names hardly known simply because the prevalence of branding by large Corporation has invaded the market by massive amount of dollars spent on communication, PR and advertising. It’s very hard today for an independent designer to “make it” in this “ocean” of branding. I can name a few like Édéenne, born in Quebec and who lives and creates in Paris France, Alessio Boschi in Italy who associated himself to an Italian manufacturer to enter the market and Alexandra Mor a New York designer born in Israel and whose mother is French.

There has been a number of famous jewelers throughout the ages: Fortunato Pia Castellani, Carlos Giuliano, Boucheron, Carl Faberge, Cartier to mention a few. In your opinion which jeweler deserves to be named the number on jeweler and why?

Most of the names you mention in your question have become corporate names, like Cartier, Boucheron and Faberge. These corporations have used the talent and success stories of the past (often referred to as the D & A of the brand name) to promote their current lines of jewelry, but quite frankly in most cases, the creativity is no longer their priority. Exception though can be made for Van Cleef & Arpels; now part of the large Richemont luxury group; their Creative Director & CEO still focus on making one of a kind pieces.

D Unknown is about Fashion & Arts inspired by Africa. Are there any African inspired jewelers which in your opinion deserves more recognition?

I recognize that there are very few pieces in high end jewelry that are inspired from the Fashion and Arts of Africa. However, the African cultures have always portrayed women adorned by jewelry and I feel that the new generation of African born designers will change that by making African precious jewelry; jewelry that they will find a way to promote worldwide or African born designers who will be hired by great jewelry houses to bring their creative inspiration and help make jewelry in Europe that showcases African cultures.

What does Dorfman Jewelers have in store for our readers?

Well, this family owned high-end store is located in a very conservative city of the New England region. However, one must understand that the presence of 600,000 students from all over the world turns the city into a very open cultural center and the influence of their presence and the time they spend in various schools and universities keeps the momentum on art, music, fashion, foods. Late Mrs. Barbara Dorfman understood that and this is why, 40 years ago, she started bringing in jewelry made by independent designers from Italy and France and other European countries. I have continued and broaden this inspiration by inviting very creative designers. The challenge is to educate the buyers (who love brand names) and broaden their interest into purchasing items from an independent, talented designer. Because, unlike in a Museum, the jewelry we bring in must sell, otherwise the store would go out of business! Hopefully one talented African jewelry designer will be featured at Dorfman in the future.