Lisa Wassmann exhibits over a decades work of Berlin’s club history during Gallery Weekend in Berlin . 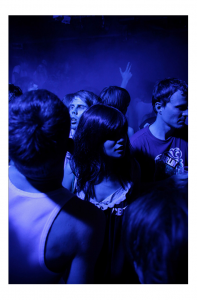 The exhibition will take place in a unique historical location well known for h ousing the famous East German singer-songwriter Wolf Biermann during the 1960’s. Here, Biermann recorded the legendary album “Chausseestrasse 131”, from which the nightlife location shares its name.

For more than ten years, Lisa Wassmann has been hailed as one of Berlin’s leading nightlife photographers, having captured the inner-circle of legendary clubs such as WMF, RIO, Berlin Bar, Scala, Magnet and the Berlin Festival to name a few. Wassmann’s  personal relationship to these spaces offers a unique and intimate glimpse into the corners of Berlin’s underground and internationally
influential scene, as it has grown and changed throughout the years.

Her work has been featured in such publications as VICE, Sleek, Zeitmagazin, Spiegel, I-D and Vogue.

We invite you to join us for a glimpse into Berliner party-nights past, and a toast to those yet to come – together with Lisa Wassmann at 131 Thursday 26.04.2018  4pm – Open End.

Chausseestrasse 131 – or „131“ for short – is a new bar owned by musician Elizabeth Paige which plays host to a rowdy crowd of artists and club kids alike.