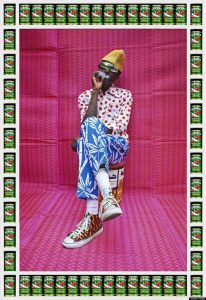 A photographer, designer, and filmmaker, Hassan Hajjaj is one of Morocco’s preeminent international artists, sometimes called his native country’s answer to Andy Warhol. Entirely self-taught and influenced by a mix of London’s hip-hop and reggae scenes and his North African heritage, Hajjaj has a diverse practice that includes portraiture, installation, performance, fashion, and furniture design. He is best known for his photography, a medium he turned to in the late 1980s and in which he draws influence from Pop Art, fashion photography, and the studio work of Malick Sidibe. His recent work centers on “rockstars,” capturing a range of international musicians and performers in exquisitely composed, radically ornate portraits (and in a film that debuted at LACMA).

Moroccan, b. 1961, based in London, United Kingdom

World Premiere of THE SAME FOR EVERYONE by Nathan Coley