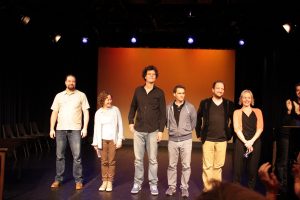 The 22nd edition of IMPRO Amsterdam will take place from the 23rd to the 28th of January in the Compagnietheater in Amsterdam.  What can you expect? Tons of great impro acts from around the world! And workshops, loads of workshops! We’ll also throw in some open stage events and bonding time.

Impro theatre is a popular, spontaneous theatrical form which relies on characters, plotlines and dialogue being created on the spot. With no rehearsals, and storylines developed with the assistance of the audience, each performance is sure to be original. This element of spontaneity is what allows for hilarious interjections and moments of comedic gold.

However, such performances require wit and cunning beyond that of a script. That is why each year IMPRO Amsterdam invites the best impro actors from all over the world to showcase their talent and hone their craft through a full programme of shows, workshops and events highlighting the art of the extemporary.

Nothing Seems To Be Working For Abercrombie & Fitch

THE ORGANISATION OF THE HOLLAND FESTIVAL DID IT AGAIN

The Most Expensive Art Ever Sold At Auction: Christie’s Record-Breaking Sale