NEW YORK, Oct. 7, 2016 Yandel opens his U.S. tour this week with a bang. The acclaimed urban music singer and producer took home this Thursday his first Latin American Music Award in the “Album of the Year” category for “Dangerous”. Earlier this week, his latest production on Sony Latin, Dangerous, earned Platinum status and his single “Encantadora” included of the same album, earned him a 5X Multi-Platinum certification by the RIAA. “Encantadora” is also, one of only three songs released and certified by the RIAA Latin Gold & Platinum Program during the past year. 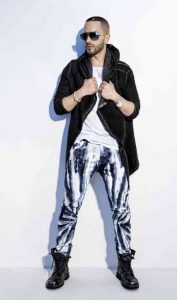 After the successful start in his native Puerto Rico, Yandel continues with his 15- city with a concert on October 9 in Chicago. The tour will also hit cities such as New York, Los Angeles, Houston, Dallas and Boston. The full list of Dangerous Tour dates is listed below. This is the first tour for Yandel as part of his newly signed exclusive touring deal with the world’s leading live entertainment company, Live Nation.

To buy tickets for Yandel’s U.S. Dangerous Tour go to www.livenation.com and www.yandel.com/tour.

He recently performed at the world famous Global Citizen Festival at Central Park in New York and introduced a new version of his title “Somos Uno” featuring Becky G as part of a special initiative for Hopeland.

A visit to ROOTS NYC

The Slipper Reinvented: A Slipper That Looks Like A Sneaker And Can Be Worn Anywhere

Designer Clothing Rentals For Kids? Yep, Its A Thing