World Premiere of THE SAME FOR EVERYONE by Nathan Coley 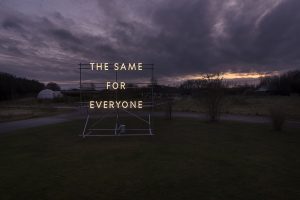 European Capital of Culture Aarhus 2017 presents a new artwork, which with its ten beautiful light installations marks the transition to 2017. The artwork was created by the award-winning, internationally acclaimed Scottish artist, Nathan Coley, and is entitled THE SAME FOR EVERYONE. The artwork is supported by the New Carlsberg Foundation.

THE SAME FOR EVERYONE has been in preparation for the last 16 months. Nathan Coley has visited the region and selected the right sites for the ten illuminated signs, each measuring five by five meters.

Nathan Coley explains:
“I wanted to visit places that in one way or another identified themselves with communities. The works need a response from their audience, so I’m not interested in creating art that requires a ten kilometre hike out into the wilderness.”

Open Air, community and magic
The artwork’s ten installations is mounted on scaffolding and consist of the kind of small, flashing crystal lights we know from the theme parks. The title, THE SAME FOR EVERYONE, brings our attention to one of the most treasured of Danish values, namely ‘equality for all’, and in fact the idea for the title, text and theme of the work was inspired by one of Nathan Coley’s trips to Central Jutland, where he visited ‘Friland’ and saw an old sign reading ‘Same for all’.

“The sentence, the words in themselves are not the focus of the work, and the sites will of course always be there. It is in the space where the words and their surroundings meet that magic happens.”

CEO of Aarhus 2017, Rebecca Matthews, highlights the site-specific nature of the artworks and what they tell us about Denmark as the basis for the choice of Coley’s works to mark our entry into 2017:
“Nathan’s wonderful works and their spread across our Region are symbolic of the power of our year to join our communities in spirited dialogue and shared celebration through that most catalytic of energies – creativity.  Nathan’s proposition THE SAME FOR EVERYONE chimes beautifully with our ethos while it dares to question and seek to provoke a debate about our core values of Diversity, Democracy and Sustainability in the changing real politic here in Denmark and elsewhere.”

Juliana Engberg, Programme Director of Aarhus 2017:
“Nathan’s ‘fairy light attractions’ are temporary proposals, introduced into the landscape or cityscape to create an image. Utilising the twinkling crystal lights common to amusements and other community attractions Nathan’s signs are seductive and sublime, while they retain a certain aspect of shysterism. The fairground lamps have an association with theatre, the circus, and temporary celebration and set up a relationship between a slightly seedy, garish aesthetic with the poetic, profound and pithy texts they support.”

The president of the New Carlsberg Foundation, Karsten Ohrt, says:
”The Carlsberg Foundation is determined to promote the opportunities of presenting art to the everyday life of the Danish people. It is our clear hope and assumption that a lot of people will meet and reflect on Nathan Coley’s original, sparkling pieces spread across the landscape.”

The title of European Capital of Culture Aarhus 2017 is the greatest cultural event to take place in Denmark in decades, and the year offers activities and events in Aarhus and 18 other municipalities in the Central Denmark Region. THE SAME FOR EVERYONE forms part of the Aarhus 2017 project Coast to Coast Visual Arts Programme.

BIOGRAPHY: Nathan Coley (born 1967 in Glasgow, Scotland) is a contemporary artist, who in 2007 was nominated for the prestigious Turner Prize. He studied art at the Glasgow School of Art between 1985 and 1989 and works and lives in Glasgow. His works have been exhibited at numerous prestigious international exhibitions and museums: The 19th Sydney Biennale 2014; The Theatre of the World, Museo Tamayo, Mexico; The 13th Istanbul Biennale 2013; Bergen Kunsthal, Bergen, Norway; Fruitmarket Gallery, Edinburgh; GENERATION, Royal Academy of Art, Edinburgh and Westfälischer Kunstverein, Munster, Germany.