The 2017 World Championships in medieval combat will be held in Jutland, Denmark, from the 25th-28th of May as a part of the line-up for European Capital of Culture Aarhus 2017. The thrilling battles will be accompanied by a large market with entertainment and gourmet food from the Middle Ages.

500 fighters from 28 different countries do battle with one another, across a 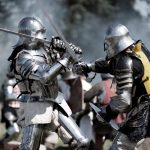 series of disciplines, ranging from man-on-man contests to large skirmishes, where teams of 16 people fight with swords, axes, clubs and warhammers. This is the setting when The International Medieval Combat Federation takes to the stage at Spøttrup, Denmark’s best preserved Medieval castle, for four days in May.

Whilst the championships take place, the parkland around Spøttrup Castle will be converted into a Medieval market, selling everything from chain mail to mead. At the castle one can experience the entertainment up close while discovering some Medieval gourmet as a real warrior, to the sounds of wild battle cries and metal on metal.

before they took to the battlefield.

How Did Justin Timberlake End Up On Michael Jackson’s XSCAPE? Timbaland Explains