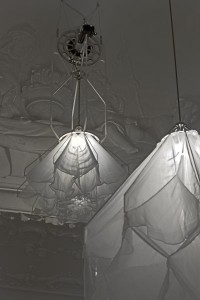 The Rijksmuseum Amsterdam acquired an installation with five Shylight by Studio Drift.

From 1 November 2014, Shylight will be permanently on view in the new Philips Wing.

The light sculptures by Studio Drift are part of many museum- and private collections all over the world. Now that the Rijksmuseum Amsterdam has enriched its collection with five Shylight, it is the first time that a work of Studio Drift can be permanently seen by the public in a Dutch museum.

The installation at the Rijksmuseum can be seen as a performative sculpture that unites the movement of industrial motors with silk chalice structures into a natural choreography. Even from the street, outside the museum, it is possible to behold the graceful movements of the Shylight: the silk sculptures are visible through the windows of the Rijksmuseum.

Shylight is inspired by a highly evolved natural mechanism called ‘nyctinasty’. It regulates that certain types of flowers close at night, for self-defense and to conserve their resources. This principle relates very much to human emotions: most man-made objects and buildings have a static form, while everything natural in this world, including people, are subject to constant metamorphosis and adaptation to their surroundings. With Shylight, Studio Drift is exploring those changes that express character and emotions in an installation of inanimate objects. Shylight descends to blossom in all its glorious beauty, to subsequently close and retreat upwards again. Our goal with Shylight is to find live, emotion and personality in dead material.

More than fifty meters of silk, hundreds of man-hours and precise handwork combined with refined technology are used for the realization of the Shylight project for the Rijksmuseum. Its choreography can be programmed to an exact and graceful dance performance. Shylight is the result of a collaboration between engineers, seamstresses, computer programmers and all specialties of the artists and designers that work at Studio Drift.

Lonneke Gordijn and Ralph Nauta founded studio Drift in 2006. Shylight is a perfect example of Drift’s philosophy: it explores the relationship between nature, technology and mankind. Moreover, the working process involves continuing collaborations with scientists, university departments, research facilities, programmers and engineers. As our visual language is characterized by dreamy and poetic aesthetics, the concept behind our work is often based on an unexpectedly critical engagement. The results are truly innovative and ground-breaking projects – a testament to the cross-pollination between the technically advanced and the aesthetically beautiful, permeated with awareness of future potentials.

Strenght is in the mind and soul