MODESTO, Calif., April 12, 2016 New Amsterdam® Vodka is teaming up with talented street artists across the country to launch the “It’s Your Town” Street Art event series– an eight-city tour showcasing original works by local artists that celebrate the vibrant culture and people who make each city come alive. Each artist will draw inspiration from their city surroundings to create eight original pieces of work. The crown jewel of each exhibition will be a larger-than-life outdoor mural for the entire city to enjoy.

The final collection of “It’s Your Town” artwork will feature pieces from all eight artists, creating an opportunity for fans across the country to recognize and celebrate the individual culture that makes their cities unique. 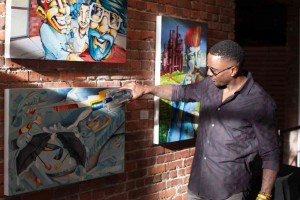 The campaign kicked off in Seattle’s SoDo neighborhood at Axis Pioneer Square on April 6, with local artist John Osgood showcasing his artwork and Seattle’s unique culture – from the city’s skyline to its signature weather patterns to the tech industry that dominates the local workforce. Osgood’s mural, located on the corner of 12th Street and Pine Street, depicts a typical rainy day in Seattle, but with bottles of New Amsterdam Vodka as the source of rainfall.

Throughout the night, patrons sipped on the DAM Hazelnut Macchiato, a coffee-based cocktail made with New Amsterdam Vodka that pays homage to Seattle’s coffeehouse heritage. Guests also had the chance to test their own street art skills on a 10-foot digital art wall.

Local personalities, including former Seattle Seahawk safety, Jordan Babineaux, came out to show their civic pride and celebrate the vibrant city of Seattle.

New Amsterdam Vodka will also donate one painting in each “It’s Your Town” market and use proceeds to benefit a local arts charity.

The “It’s Your Town” tour will make seven additional stops, including: