Femke Herregraven, Lex Pott, Yuri Veerman and Sander Wassink are the four talented finalists of the MINI Young Designer Award (MYDA) 2013. This was announced today by the selection committee of the Dutch Design Awards. An international jury selects the winner, whose name will be made public during the Award Show in Eindhoven on October 19. The incentive award for young design talent, co-sponsored by MINI Netherlands, includes a cash prize of € 2,500 and the free use of a MINI for a period of one year. 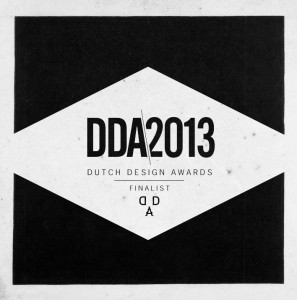 MINI YOUNG DESIGNER AWARD
The MYDA selection committee – made up of Saskia van Stein (Bureau Europa), Dimitri Nieuwenhuizen (LUST), Agata Jaworska (Droog Design), Irene van Peer (Utrecht School of the Arts), Lena Shafir (Shafir Etcetera), Mary Hessing (Eigen Huis & Interieur) and Karina van Eeten (Design Academy) – has instead of the usual three finalists, appointed four finalists from all entries this year. The quality of entries this year was so high that the committee felt obliged to make this decision. Particularly striking was the high number of talented graphic designers, which is reflected in this year’s nominees.

FOUR FINALISTS
Femke Herregraven
For Femke Herregraven, graphic design is a tool to investigate our complex society and to research the power structures therein. With the attitude of a journalist, she denounces problems and inequalities.

Lex Pott
The work of designer Lex Pott is characterised by a process-based approach to sturdy materials such as wood, metal and stone. In his designs, he pares these raw materials to their essential nature, showing the various stages that the material goes through while being processed.

Yuri Veerman
In his work, graphic designer Yuri Veerman often uses cultural symbols, which he unravels and puts back together again. In this way, he encourages people to look at the subject he addresses in a different way.

Sander Wassink
Artist and designer Sander Wassink challenges us to redefine the perception of beauty. Wassink’s non-functional products can be understood as paradigms raising questions about the essence of observation, functionality, transience, and beauty.

See the full motivation and selection criteria on: www.dutchdesignawards.nl

AWARD CEREMONY
The winner of the MYDA receives a cash prize of € 2,500 and the free use of a MINI for one year. The announcement takes place on October 19 during the official award ceremony of the Dutch Design Awards, part of the annual Dutch Design Week in Eindhoven. This will take place from 19-27 October.

MINI
MINI Netherlands has since 2011 adopted the MINI Young Designer Award, an award that fits well with the young car brand. Remaining true to its English ‘design roots’, MINI looks forward, and evolves. The concept of originality fits the British brand like a glove. MINI produces challenging creations in an ever-changing world.

DUTCH DESIGN AWARDS
Dutch Design Awards (DDA) are internationally renowned prizes awarded to the very best in the field of Dutch Design. Together, the award ceremony, the exhibition during Dutch Design Week featuring the work of all finalists, and the publication of the ‘Dutch Design Yearbook’ in collaboration with nai010 Publishers, form a platform for Dutch design across its full width.

The awards are presented in the main categories Product, Spatial, and Communication. Special awards are the Future Concepts Award (for designs that give us a glimpse into the future), The Golden Eye (the most successful design of last year), the Best Client Award, the BNO Piet Zwart Prize – Lifetime Achievement Award, and the Public Award, chosen by the public.