The cultural city of Leipzig, Germany, will get off to a spectacular start in 2017 with some outstanding exhibitions. The Panometer Leipzig will take its visitors on a journey beneath the waves from 28 January 2017 onwards: The new 360° Panorama “TITANIC” by the celebrated panoramic artist Yadegar Asisi will revisit the most famous shipwreck of all time and will show the ocean giant as it is today – 105 years after the catastrophe – at the bottom of the Atlantic Ocean. http://www.asisi.de 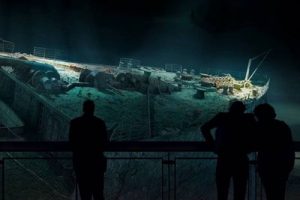 The Museum of Fine Arts will experience a true whirlwind of colour with its special exhibition “Nolde and ‘Die Brücke'” (12 February – 18 June 2017). The young artists of the Expressionist ‘Brücke’ group, including Fritz Bleyl, Erich Heckel, Ernst Ludwig Kirchner and Karl Schmidt-Rottluff, were fascinated by the works of the outstanding painter Emil Nolde. The collaboration between the group and Nolde, who was almost a generation older, lasted for almost two years from 1906 onwards, and marked the beginning of modern art in Germany. For the first time, the Leipzig museum is telling the story of this fascinating chapter in German art history through 150 paintings, drawings and prints.  http://www.mdbk.de

The ‘Spinnerei’ in Leipzig is unmissable for contemporary art enthusiasts. Eleven leading galleries and over 100 studios are now housed within the walls of what was once the largest cotton mill in continental Europe. For the Spinnerei Gallery Tour, all galleries and exhibition spaces open new exhibitions (14 January, 29/30 April and 15/16 September 2017; http://www.spinnerei.de). It is also worth making a detour to the newly opened ‘Kunstkraftwerk’: For the “Hundertwasser Experience”, the Italian immersive artist Gianfranco Iannuzzi has transformed the former heating plant into a colourful, lively and engaging immersive Hundertwasser world. Thanks to the large-scale video installations, visitors can immerse themselves in the works of Friedensreich Hundertwasser, painter and architect, until 24 August 2017. http://www.kunstkraftwerk-leipzig.com

2017 marks the 500th anniversary of Luther nailing his theses to the door of the Castle Church in Wittenberg. This major anniversary of the Reformation will be celebrated in Leipzig with a wide-ranging programme of events. A dozen special exhibitions in Leipzig museums – including the Museum of City History, the Museum of Printing Arts and the Museum of Fine Arts – will illuminate the reformer’s work in Leipzig and the surrounding region. The largest city in the Luther region, Leipzig played a key role in the distribution of Luther’s writings, while the Leipzig Disputation of 1519 proved to seal his break with the Catholic Church in Rome. http://www.luther-in-leipzig.de

Being Dishonest About Ugliness