Organisation in Design (OiD), which in July was appointed art director of the Klokgebouw for the twelfth edition of Dutch Design Week (DDW), has announced the names of the first participants. Designers, collectives, studios, labels, design-related businesses and cultural institutions that have not yet signed up have been given one more week to do so in order to be part of this central location of the design week in October. 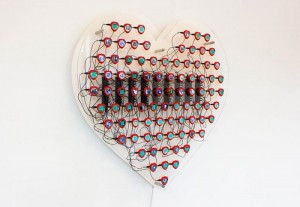 To put together an appealing and balanced programme, not only reputed names and labels will be present, but also up-and-coming talents – in both individual and joint presentations – will be given the space they need.

Designers and studios such as Studio Makkink & Bey, Van Eijk & Van der Lubbe, Smool by Robert Bronwasser and Floris Hovers have already confirmed their participation. Just like labels Republic of Fritz Hansen, Kvadrat and Gispen Today. The Klokgebouw will also give the floor to a number of high-profile speakers such as DDW ambassadors Piet Hein Eek and Daan Roosegaarde.

Under the leadership of the new art directors, the implementation and set-up of three of the four spaces in the Klokgebouw will be fully revised. As designers are forming new connections with fashion, technology, science, crafts and education, OiD aims to show the versatility of design, and to create excellent networking opportunities that will in turn give rise to new collaborations.

We are pleased with young talents like Jeroen van Loon, who shows us the downside of the social media.

And with the Taiwanese QisDesign, which presents an installation in which innovation and technology are central. Other examples include product designer Jólan van der Wiel, who together with fashion designer Iris van Herpen developed a magnetic dress. And the Zuiderzeemuseum cooperates with Studio Glithero on a new project.

Officially, the registration period for DDW closed on August 1. In view of the renewed set-up, however, all potential participants are given the opportunity to sign up online until Thursday, August 15. For more information and registration, go to the DDW website.