How a Small Indie Magazine Gets Fashion’s Hottest Tell-Alls 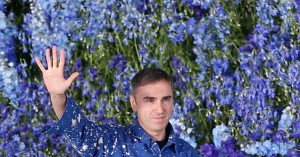 When Raf Simons left Christian Dior just over two weeks ago — a designer departure felt round the world — he did so with the usual anodyne joint news release containing generic quotes in which he and Dior management expressed their mutual appreciation and respect. That, they said, was the end of it; no one involved was giving any further interviews.Except, it turned out, Mr. Simons already had.This week, System, a twice-yearly independent glossy magazine (about, yes, the fashion system) headquartered in London, lands with a thud on select newsstands (the racks at the Palais de Tokyo bookstore in Paris, or Dover Street Market in New York, to give you an idea). The cover story is an eight-page interview with Mr. Simons, as well as more than 100 pages of Juergen Teller photographs of Mr. Simons’s last two shows for Dior, their audiences and his collection in the halls of Versailles.On the RunwayVanessa Friedman writes about news happening in the fashion industry, from business decisions to designer moves. Burberry Puts the Nail in the Coffin of the Multiline Brand NOV 4 Protecting Underage Models Becomes a Federal Issue NOV 2 For Halloween, Fashion Stories to Scare You Silly OCT 30 Assessing the Alber Elbaz/Dior Rumors OCT 29 Adam Selman, Rihanna’s Favorite Designer, Enters the Wearables War OCT 27See More »Though written before the news of his exit broke (they stopped the presses to rewrite the editors’ letter and add an epilogue), the piece, by Cathy Horyn, the former New York Times fashion critic and current critic-at-large of The Cut, is about as close to an exit interview as you could imagine.

What Design Can Do – “Less pretty products, more smart services”