WEST PALM BEACH, Fla., March 17, 2014 A formidable lineup of celebrities has made headlines at Palm Beach Modern Auctions (PBMA) over the past year, from the late Steve Rubell and his glitzy Studio 54 clique to fashion icon Karl Lagerfeld. On Saturday, March 22nd, however, the focus turns to superstars of modern and contemporary art, and furniture design. In their 470-lot auction, PBMA will showcase such eminent names as Henry Moore, Piero Fornasetti, Vladimir Kagan and Phillip & Kelvin LaVerne. 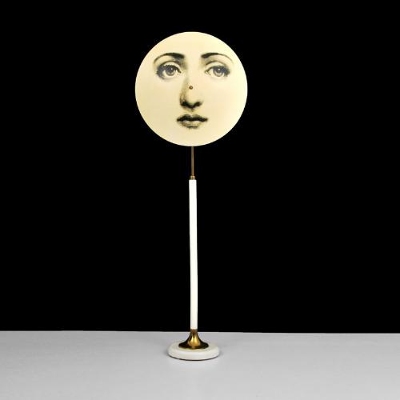 There was great interest in the Larry Mohr estate artworks consigned to PBMA’s November auction. An accomplished sculptor whose figural and abstract works are held in many prestigious collections, Mohr (1921-2013) left much of his personal collection to art institutions. The March 22 sale contains seven Mohr works of bronze, copper or silver, each modestly estimated at $1,000-$2,000. Although of smaller scale, they are nonetheless quintessential Mohr designs, some having interesting interlocking segments.

From the design genius of Vladimir Kagan (German/American, b. 1927) comes a Model No. 175F abstract walnut and black leather contour rocking chair with matching ottoman. The duo is offered with a $5,000-$8,000 estimate.

Four creations by Piero Fornasetti (Italian, 1913-1988) are included: two mirrors, an umbrella stand, and a lollipop-form graphic floor lamp with the face of Italian opera singer Lina Cavalieri. Standing 75 inches tall, it has a $10,000-$15,000 estimate.

Another premier lighting entry, a Serge Mouille (French, 1922-1988) “Simple” floor lamp, is made of enameled metal and brass with an adjustable “aerodynamic” shade. The ultra-sophisticated lamp is estimated at $10,000-$15,000.

A rare Phillip (1907-1987) & Kelvin (b. 1937) LaVerne freeform Odyssey II cocktail table stands on bronze pedestals with a bronze, pewter and enamel surface etched with scenes from Homer’s “The Odyssey.” It is one of only two that were made; the other was commissioned by shipping tycoon Aristotle Onassis. Estimate: $20,000-$30,000.

A prized entry is the monumental cobalt blue spherical pottery sculpture by Jun Kaneko (Japanese, b. 1942-). For many years, the sculpture was part of the Ann Norton Sculpture Garden’s collection in West Palm Beach.

A striking piece of great heft, the sculpture had to be lifted by crane and transported on a flatbed trailer from the Norton garden to PBMA’s exhibition center. Estimate: $17,000-$25,000.

A Fernando Botero (Colombian, b. 1932-) pencil-on-paper still life titled “Nicaragua Banana” is artist-signed and dated 1973. The 20-by-36in artwork is accompanied by a letter of authenticity from Marlborough Galleries Inc. Estimate: $25,000-$30,000.