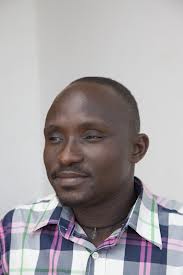 “I always work with old things which have been used for a long time; there is a kind of life which inspires me, and with the head of the doll, when I put them together, it’s as if another life begins. The doll’s head animates all the other materials.” Benin’s artist Gérard Quenum about his spoky dolls.

Gérard Quenum was born in the coastal town of Porto Novo, the official capital of the Republic of Benin, in 1971. He is part of the latest generation of sophisticated young francophone artists now breaking out of Africa and demanding wider recognition for their art on the international stage. Benin has long been blessed with a wealth of outstanding contemporary artists, with Cyprien Tokoudagba and Georges Adeagbo coming early to the attention of western collectors in the late 80’s and early 90’s. Hot on their heels came ever more celebrated artists such as Romuald Hazoumè, Dominiquw Kouas, the Dakpogan brothers et al. More recently, a rising generation of ‘street artists’ has been developing around Porto Novo and Cotonou. Gérard Quenum stands out amongst these younger tyros, as the original creator of a distinct sculptural style, and with growing maturity, his work is now to be found in galleries on the grand Boulevards of Paris as well as the finer streets of London.