Lincoln Center is buzzing with the start of Mercedes-Benz Fashion Week as it gets underway from February 7th to 14th, 2013 with more than 90 designers presenting their Fall 2013 collections.  Among the most anticipated fashion houses displaying their latest looks on the runways, Mercedes-Benz is also rolling-out its all-new CLA-Class and limited edition SLS AMG Black Series, in a new brand installation featuring coordinating looks curated by well-known fashion stylist, Danielle Nachmani. 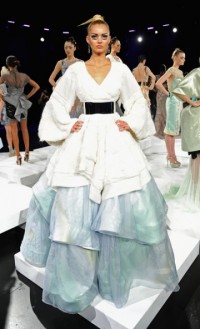 The installation features 28 looks representing a spectrum of fashion designs from ready-to-wear to haute couture that grace Lincoln Center runways over the course of seven days.  Two Mercedes-Benz vehicles will amplify this theme.  The all-new 2014 CLA-Class, set to establish a new entry segment within Mercedes-Benz and referred to as a four-door style rebel. And, the SLS AMG Black Series, a show-stopping super car known for its iconic Gullwing doors and powerhouse performance.

The CLA-inspired looks styled by Nachmani feature high-end designs that are the staples of everyday fashion wardrobes, which reflect the philosophy behind the CLA – cutting-edge automotive design, luxury and performance, yet extremely accessible.  It will be juxtaposed with haute couture looks that match the caliber of the SLS AMG Black Series, a limited-edition 622 horsepower coupe shown in an eye-catching solarbeam yellow that makes a statement similar to the perfect red carpet Oscar dress.

“Mercedes-Benz design is fascinating in so many ways providing the brand with a unique opportunity to position itself among the most important fashion labels in the world,” says Danielle Nachmani, stylist for Mercedes-Benz.. “There are only a handful of iconic fashion houses that can take luxury across every segment, but still hold true to its values and craftsmanship.”

Within the display, attendees will have the chance to have a car drawn by artist and illustrator, Peter Breese, based on their personal fashion cache as inspiration.  These illustrations can be shared on Facebook, Twitter or email.  An insider’s look on Pinterest is also available where Mercedes-Benz boards are curated with images of cars, clothing and happenings throughout the week.

Supermodel Karlie Kloss will make an appearance on February 12, 2013 to show-off a key visual featuring herself with the all-new 2014 CLA-Class photographed by Ryan McGinley with creative direction from Jefferson Hack.

When An Artist Allowed Her 4-Year-Old Daughter To Finish Her Drawings, Something Awesome Happened