FIFTH MILKSHAKE FESTIVAL WILL BE MORE INTIMATE AND INNOVATORY

Milkshake festival, Saturday 30th and Sunday 31st of July in Amsterdam at the Westerpark is increasingly taking form. For the fifth anniversary, the festival is celebrated over two days. Also the premiere of a new stage will take place, Transformer presented by Joost van Bellen and Zu Browka International. In addition there will be a nearly 2000 square meters roller disco. Not only the duration is extended, there are nine instead of seven stages. Councillor of Amsterdam Simone Kukenheim, responsible amongst others for Diversity, will open the festival on July 30th. 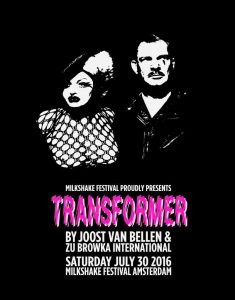 Joost van Bellen on Transformer: ‘Transformer is a new phenomenon on Milkshake: a futuristic party where everything is different and nothing is what it seems. Zu Browka International and I will take charge against morality and decency and transform reality into a dream world where everyone can be who they want to be, if only for a few hours. Transformer swaps during Milkshake the sunlight for darkness and will become an extreme exciting and unpredictable nightclub in the Transformatorhuis. A motley collection of national and international top stars give an appearance. An army of night butterflies help us in our intergalactic fight against bigotry, stereotypes and sectarianism. “

At the Westerpark during Milkshake there will be a nearly 2000 square meters roller disco. Visitors can take their own skates, but also rent them. Also workshops will be organized throughout the weekend.

Initiator Marieke Samallo: “The space we have reserved for the roller disco results in less availability of day tickets. But that also fulfils a question we received over the years that we shouldn’t become too big. The roller disco will kill two birds with one stone. We present a beautiful new part and bring back the intimacy of the first edition. We have our own stages, Supertoys & Vieze Poezendek that will shine both days as fixed elements of Milkshake. All other venues will be converted in the night from Saturday to Sunday as we collaborate both days with various Dutch and international organizations.”

Milkshake festival is a dance festival that has been created from the thought ‘nothing should be a must, anything is possible’. Milkshake festival shows that entertainment, taste in music, choice of clothing and status has nothing to do with sexuality. Life is just a party thanks to the great diversity of skin colors, religions, sexual preferences and male and female forms. Milkshake wants to celebrate the city’s initiatives and is an impetus to bring courtesy and friendly manners back into society. Thick, thin, small, large, gay, straight, trans, black or white: people are the salt of the earth and this is what we celebrate!

Dance or Die: Syrian Dancer Fights The War In His Own Way