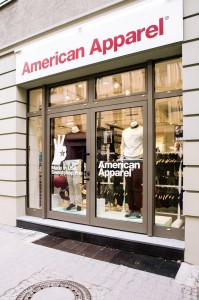 Located in Mitte, the central borough of Berlin, the store was originally opened in February 2007 as American Apparel’s third location in the city. In July of 2013 the company took the opportunity to revitalize and improve the location.

“When the building changed owners this year, the new landlords asked if we wanted to expand our space. We saw this as an amazing chance to take the store to an entirely new level–bigger, better designed and more efficient,” said Dov Charney, founder and CEO of American Apparel.

The area of the store has expanded by almost 170%, from 145 sq. m. to almost 390 sq. m. In addition to increasing the size of the original downstairs floor, the company added a second level to its lease, adding another 230 sq. m. to the size of the store. The renovations resulted in the installation of a bold array of fixtures and stand-out paintwork to give the store’s customers a top-to-bottom new experience shopping at the location.

The reopened store is on the Munzstrasse, the top shopping destination for Berliners. The store can be found near other fashion retailers such as Adidas and Acne, but stands apart with its uniquely large size. With almost 400 sq. m. of sales floor, the store is able to display the company’s full range of inventory, including winter garments for men and women as well as its line of clothing for children.

“It’s exceptional for a store located in the Munzstrasse to have this much sales space. Even among the high-quality retailers residing in the area, our store is going to stand out as one with something to offer for every shopper and gift seeker in the area,” said Jan Willem Hubner, an American Apparel operations manager for Europe.

The store officially opened in December. Store hours as well as contact information for the location can be found at the company’s web portal, http://americanapparel.net.

Craftsvilla.com Launches Largest Collection Of Indian Jewellery In The World

LC Waikiki Returns to the City With Its Autumn-Winter Collection

Sluitstuk in reeks Making Things Happen in The Merchant House