All Aboard for the Semi-Final Allocation Draw

The Semi-Final Allocation Draw, to determine which country will participate in which Semi-Final of the 2018 Eurovision Song Contest will take place in the City Hall of Lisbon on 29th January at 13:00 CET. During the ceremony, the Mayor of Kyiv, Vitali Klitschko, will hand over the Host City Insignia to Fernando Medina, Mayor of Lisbon.

The Semi Final Allocation Draw and the Host City Insignia Exchange are key milestones in the preparations for the Eurovision Song Contest. The ceremony will be hosted by Sílvia Alberto and Filomena Cautela who form half of the presenting team for Eurovision 2018. You will be able to watch all the action live from Lisbon on YouTube.

How does the draw work?
The first part of the draw will determine in which Semi-Final each of the six pre-qualified countries (France, Germany, Italy, Spain, the United Kingdom and host country Portugal) will broadcast and vote. 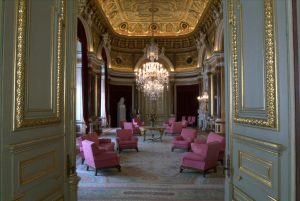 Semi Final Allocation Pots revealed!
The 37 Semi-Finalists have been allocated into six pots, based on historical voting patterns as calculated by the contest’s official televoting partner Digame. Drawing from different pots helps to reduce the chance of so-called neighbourly voting and increases suspense in the Semi-Finals.

Due to the uneven number of Semi Finalists, the host broadcaster RTP together with the EBU, and approved by the Reference Group of the Eurovision Song Contest, have decided that 19 participants will compete in the first Semi-Final and 18 participants will be allocated to the second Semi-Final.

Let’s get the party started: EuroClub venue confirmed
RTP, Host Broadcaster of the 2018 Eurovision Song Contest also revealed the locations for key event that will take place during the Event Weeks of the competition in Lisbon. Following the theme for the 2018 contest, all these events will take place beside Lisbon’s waterside.

The Eurovision Village will be located at Praça do Comércio, the most iconic square in Lisbon. It will open from 4th May and will feature a large screen for the public to watch the live shows. It will also be the central hub for sponsor activities and a series of concerts and performances throughout the Event Weeks.

The EuroClub, the place to party during the Eurovision Song Contest, will be located at Lust in Rio in Cais do Sodré, very close to the Eurovision Village. It will be open from 4th May with the exact schedule to be confirmed in the coming months.

The Opening Ceremony of the 2018 Eurovision Song Contest will take place on Sunday 6th May. The 43 participating delegations will walk along a special blue carpet, which will be located at the Museum of Art, Architecture and Technology (MAAT), before the reception which will take place in Lisbon’s Electricity Museum.

You can watch the Semi-Final Allocation Draw live on the official Eurovision Song Contest channel on YouTube on Monday 29th January from 13:00 CET.