The city of ’s -Hertogenbosch in the Netherlands will commemorate the 500th anniversary of the death of the Netherlands’ most important medieval painter Hieronymus Bosch (ca. 1450 – 1516) in 2016 with the international Jheronimus Bosch 500 event. His era and themes will be brought back to life by a wide range of festive events with his work as an unending source of inspiration: exceptional music, dance, theatre and circus productions, exhibitions, projects in public spaces, lightshows, books, games and apps. But also scientific research, restorations and the unique exhibition Jheronimus Bosch – Visions of a genius (13 February – 8 May 2016). In this way, Jheronimus Bosch 500 brings the city’s most famous son back to ’s – Hertogenbosch where, at his family’s studio, he devised and created his works.

The festive, cultural, Bosch 500 year 2016 started on January 1 2016 with a concert at The Concertgebouw in Amsterdam by the Nederlands Blazers Ensemble (Netherlands Wind Ensemble) in a Bosch setting. On 12 February 2016, the exhibition Jheronimus Bosch – Visions of a genius was officially opened at Het Noordbrabants Museum. The exhibition will be the highlight of a major, festive, internationa 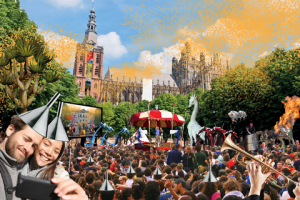 l cultural event commemorating the 500th anniversary of the death of the genius Hieronymus Bosch in his city of birth. Inhabitants of and visitors to ‘s – Hertogenbosch will be able to marvel at Bosch’s characteristic panels and drawings of bizarre creatures, devilish dreams and magical monsters.

The locations in the city that remind us of Bosch provide an excellent starting point for telling his story, that of his work and the times he lived in. Examples include the family studio, his home, the Saint John’s Cathedral, the Binnendieze river and the Zwanenbroedershuis of the Illustre Brotherhood of Our Blessed Lady, of which he was a member. The most advanced virtualisation technologies have been used to create a sustainable, permanent exhibition concept in the shape of an appealing tour that enables visitors to experience Bosch’s city.

Throughout 2016, ‘s – Hertogenbosch will offer a stage to exceptional performances and presentations. Nanine Linning and her dancers from the Stadttheater Heidelberg will perform the Dutch première of a Hieronymus Bosch – inspired new choreography.

The Canadian circus troupe Les 7 Doigts de la Main will be at the Theater aan de Parade with a special Bosch performance in cooperation with Circo Circolo. Young amateur sports enthusiasts and acrobats from ‘s – Hertogenbosch, in collaboration with Flik – Flak, will present De Stoet van Bosch [Bosch’s Procession] in May, and in June the city centre will return to De Wereld van Bosch [Bosch’s World] full of ancient crafts, children’s games, songs, food & drink. Also in June, ‘s – Hertogenbosch’s waterways will be filled with wonderful ships and objects under the title Bosch Parade.

Premieres by theatre companies from the Netherlands and abroad at Theaterfestival Boulevard will allow us to hear and see how Bosch has inspired these artists. During the Circo Circolo festival (October) Les Colporteurs from France will present their vision on Hieronymus Bosch, whilst in November the requiem composed by Detlev Glanert will be performed for the first time by the Royal Concertgebouw Orchestra and the Netherlands Radio Choir during the Bosch quiem at the Saint John’s Cathedral.

At ’s – Hertogenbosch, the Jheronimus Bosch Art Center shows the complete works by Bosch in high quality reproductions and in 2016 will provide a year – round programme of lectures and exhibitions on coins from Bosch’s era, for example. From March onwards, Bosch Open Expo (B.O.E.) will offer a platform for professional artists and amateurs to display their work to a broad audience. This exhibition is put together on the basis of open submissions with a professional jury selecting the art works thay will be on display on various locations in the city of ’s – Hertogenbosch.

The complete programme of Jheronimus Bosch 500 in 2016 consists of over ninety cultural activities in the Netherlands and other European countries.

More details can be found on www.bosch500.nl.

Things You Need To Know About Shopping For Vintage Clothes

What Design Can Do – “Less pretty products, more smart services”